Just because summer is winding down, does not mean that the barbeque will be put to sleep just yet. If you’re a die-hard griller, you know that there are still plenty of late summer nights left to enjoy the smoky taste only a barbeque can deliver.

For years I have been the brunt of too many jokes at family barbeques, as I munch on salad while my family eats cheeseburgers and hot dogs (I am still not interested, Uncle Peter, but thanks for offering every single time for the last decade). This summer I thought that it was finally time I got my act together to create a real, grill-able, vegetarian version of the classic burger good enough for carnivore to eat.

Now, I have absolutely tried my best to make these before, but there are always problems, such as the patties falling apart while cooking, too dry, too moist, too “vegetarian-tasting”. It is not until now that I have the confidence to say I’ve finally mastered it. These black bean burgers are juicy, flavourful, and they retain their shape after flipping on the grill! Incredible.

Bad News for BBQs
If the taste of the black bean burger doesn’t convince you, perhaps some information on the health risks of grilling the “alternatives” will. Many consumers are unaware that barbequing popular meats can produce cancer-causing and mutagenic compounds called heterocyclic amines (HCAs). HCAs, are produced during the cooking of many animal products, including chicken, beef, pork, and fish. In January of 2005, the United States government officially added HCAs to its list of known carcinogens.(1)

Grilled meat yields some of the highest concentrations of heterocyclic amines (HCAs).(2) These compounds form when a combination of creatine (a specific amino acid found in muscle) and sugars, which are both found naturally in meats, are heated during cooking.(3) Grilling is particularly carcinogen-forming because the process involves high heat and long cooking times. Nearly all meats, including chicken and fish, produce significant amounts of HCAs when tossed on the grill.

But there is good news! Since creatine, one of the ingredients for the formation of HCAs, is mostly found in muscle tissue, grilled veggie burgers, such as the recipe below, and other vegetarian foods contain either no HCAs or negligible levels.(2)
Choosing plant-based foods instead of meat also lowers cancer risk in other ways. Not only are vegetables low in fat and high in fiber, they also contain many cancer-fighting substances. Chalk one up for the bean burger beauty! 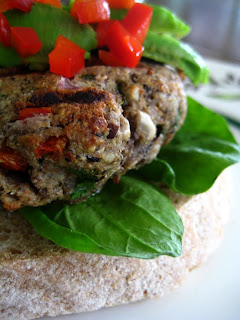 Directions:
1. Put one half of a medium-sized, peeled onion in a food processor and pulse until minced. Add 1 red bell pepper and pulse just until finely chopped. Set them aside in a medium bowl.
2. Combine the garlic, spices, salt, almonds, sunflower seeds, and oil in the food processor and pulse until texture resembles breadcrumbs. Add cilantro and pulse until the cilantro is well incorporated. Transfer mixture to the bowl with the onion and pepper.
3. Put the black beans and water in the food processor and process until smooth. Add this mixture to the bowl along with the wheat germ. Mix (preferably with your hands) completely, and then taste for seasoning – you may want to add more salt, spices, or herbs at this point.
4. Separate bean mixture into six balls and shape into patties. Make sure the patties are not too thin or they will fall apart.
5. Grill for 8 minutes on each side, or until slightly browned. Alternatively, bake at 350 degrees F for 20-30 minutes until heated through.