I’ll never forget when I was working on an organic farm in California, weeding in the garden, about to pull up what I thought was a gigantic invasive species of some sort. Turned out it was Jerusalem artichokes (also called sunchokes). If you have never seen these little tubers before, you would be shocked to see the size of their plants in comparison to the teeny tiny edible roots.

Despite their name, Jerusalem artichokes are actually a member of the sunflower family, and have no relation to Jerusalem or artichokes. The small, gnarly-looking tuber somewhat resembles ginger root. The flavor is earthy (which can actually be overwhelming if not complemented with the right foods), slightly sweet, and similar to a water chestnut. The texture is less starchy than a potato, and for this, they’re often recommended for diabetics.

Nutrition-wise, Jerusalem artichokes have one of the highest amounts of inulin, a special type of carbohydrate, than any other plant. Inulin is not absorbed in the gastrointestinal tract, so it’s actually considered fiber. Inulin feeds the good guys in your colon, almost like a fertilizer!

For this dish, I chose red onion, garlic, kale, and beluga lentils, with a fiery harissa dressing. I wanted to keep within the realm of grounded flavours, then hit them with a smoky sauce that bursts through it all. The result is surprising and delicious. What’s more, the colors of the dish are so naturally beautiful, punctuated by the vibrant red of the dressing. It’s definitely a visual feast.

The cooking method used here is also key: Jerusalem artichokes can get rubbery if exposed to too much heat. Here, I give the artichokes a quick sear so they develop a nice crust, and then I cook them until just tender; you can enjoy this vegetable raw, so it’s nice to keep it al dente.

Make this a complete meal and serve the lentil mixture over brown rice or quinoa.

*Note: you can find harissa at most ethnic grocers or make your own.

Directions:
1. Drain and rinse lentils well. Place in a pot, cover with water and bring to a boil. Reduce to simmer and cook until tender (approx. 20-25 minutes). Drain and rinse.

2. While the lentils are cooking, prepare all vegetables. Scrub the Jerusalem artichokes. If their skins are rather thin, you don’t need to peel them, otherwise do so. Cut into cubes. Wash kale, cut into small pieces. Chop onions, mince garlic.

4. In the same skillet, heat coconut oil or ghee, add onions and sea salt. Cook on medium heat until softened, 5 minutes. Add garlic, cook for a couple minutes. Add Jerusalem artichokes, toss to coat with oil and leave for at least 5 minutes on medium heat – do not stir! After 5 minutes, check the bottom to see if browned. If so, stir to flip them all and let cook another 5 minutes. Repeat once more (they should not be on the heat much longer than 15 minutes).

6. While the dish is cooking, make the dressing. Put all ingredients in a jar, shake until blended (add harissa one teaspoon at a time until it is to your preferred spiciness). Season to taste.

7. In a large bowl, toss the lentil with half of the dressing. Add vegetable mix, pour most of the dressing over and lightly toss. Put on a serving dish, and drizzle the last remaining dressing over top, making sure to let some hit the sides of the plate for visual effect – the colour is astounding! Eat immediately.

If you live in Denmark, check out my features in the current issues of Mad & Venner Magazine and Copenhagen Food Magazine. 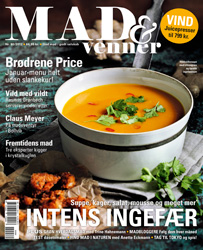 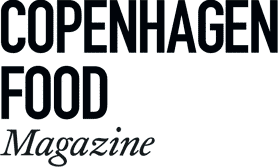