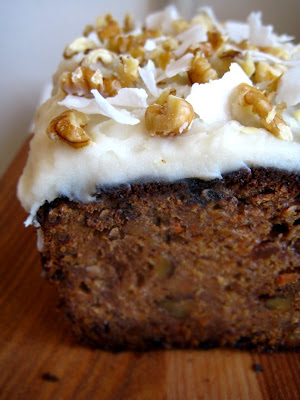 I know that I promised to write a post about DIY-green cleaning products, but I will get to that after I share this recipe with you!

One of my oldest and dearest friends came to Copenhagen for a visit. She has just had a birthday, graduated from her Masters program and got an incredible job. To celebrate all of the above, I thought that I should make a carrot cake (her favorite), with a healthy spin (my favorite).
We’ve been friends for 17 years now despite our many, distinct differences. She is obsessed with Star Trek and I hate sci-fi anything. I love camping and she’s afraid of fruit flies. I wouldn’t say we’re quite opposites, but I often marvel at our inexplicable connection. Coincidentally, this recipe for banana carrot cake conjures up the same question: how do two seemingly opposite entities combine to make miracles happen? Crunchy, savory carrots are combined with soft, sweet bananas. I guess they just balance each other out, creating so much more than the sum of their parts.

Since this dessert is a cross between a carrot cake and a loaf of banana bread it’s like all of my widest fantasies come true. It is moist and dense, with none of the crumbly delicacy of a standard carrot cake – it’s a real tasty beast. And surprise! There is no sugar in the recipe; the sweetness comes from dates and ripe bananas. It is also packed with walnuts, with optional add-ins like raisins, coconut flakes and dried pineapple.

The icing is a vegan recipe, but you can also use the traditional cream cheese version if you’re into cows (6 ounces cream cheese, room temperature + 3 tablespoons agave nectar or maple syrup, whipped together).

Directions:
1. Preheat oven to 350F. Line a 9x5x3 / 8-cup loaf pan (or 8×8 cake pan) with parchment paper.
2. Sift together the flour, baking powder, cinnamon, and salt. Stir in the walnuts and set aside.
3. Stir the dates into the melted butter, breaking up the dates a bit.
4. In a separate bowl combine the bananas and carrots. Stir in the date-butter mixture, breaking up any date clumps as you go.
5. Whisk in the yogurt and the eggs. Add the flour mixture and stir until everything just comes together. Spoon into the prepared pan. Bake for about 50 – 90 minutes or until a toothpick tests clean in the center of the cake – it’ll be less if you are using a standard cake pan. Remove from oven and let cool.
6. While the cake is baking whip together the icing. Recipe below. 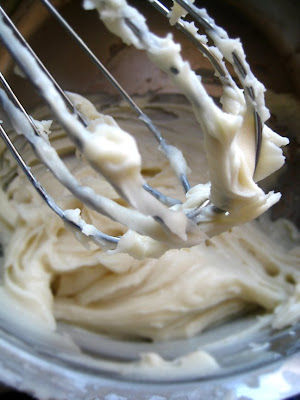 Directions:
1. In a medium saucepan, heat coconut milk, agave and salt, simmer no low for 5-10 minutes, stirring constantly so that it doesn’t burn.
2. In a small bowl, combine arrowroot and water to form a smooth paste.
3. Pour arrowroot mixture into saucepan.
4. Mix contents of saucepan with a hand blender (or quick hands) and bring to a boil, briefly.
5. Remove pot from heat and very gradually blend in coconut oil.
6. Place pot in freezer for 30-40 minutes, until frosting solidifies and turns white.
7. Remove from freezer and blend again, until fluffy.
8. Spread over cake or cupcakes.

This recipe made enough frosting just to cover the top of my cake that was baked in a loaf pan. If you wanted to make cup cakes or a traditional layer cake, I would suggest doubling or tripling the recipe. I would also suggest cutting the loaf in half, and turning this into a layer cake by sandwiching icing between the top and bottom halves. Impressive!

I had no idea that carrots and bananas could be buddies, but sometimes we can’t explain the spark between two beings, we just have to sit back, smile and appreciate that their play dates make magic.