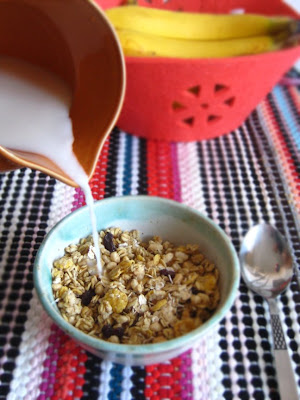 Over the past few months, I have been considering getting off the soy wagon. The research and information that is surfacing about to the health food industry’s little darling, reveals that it may not be as virtuous as once believed.

As with the issue of cow’s milk, I don’t want to go heavily into the details, as this is purely a personal choice. In addition, the research I’ve explored isn’t exactly from non-biased sources, and although very interesting, I don’t feel comfortable making sweeping statements that I can’t back up.
So, I did a little research of my own, and it is evidence enough.
To be frank, for the past several months, my premenstrual syndrome has been rather, ahem, out of hand. I’ve been suffering from all the classics: serious, devil-possessed mood swings, cramps, swollen everything, and being a holistic nutritionist I know that this is a sign of a major imbalance. After picking up my usual container of soymilk a while back, it hit me like a ton of tofu bricks: could this estrogen-mimicking legume be the source of my suffering? I’ve been hitting the carton pretty hard since moving to Denmark, for there is a serious lack of alternative vegetarian protein sources available such as hemp, spirulina, and bee pollen. In an attempt to keep my protein levels where they need to be, I’ve been drinking and eating more soy products than usual. Everything in moderation they say…I have been punished.

So, since I’ve put the kibosh on soy, a miraculous thing has occurred: the PMS has improved significantly, so much so, that my last monthly bill came by complete surprise, instead of sending me the oh-so-unsubtle signals of irrational crying spells and painfully bloated breasts. Too much? 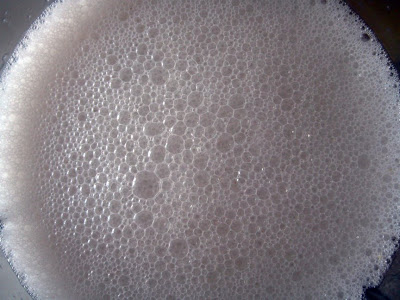 Rice milk is a very simple and inexpensive thing to make, and in my opinion, better than soy. It is not a good source of protein, so it should not substitute protein foods in your diet. However, I think rice milk would be very helpful for those transitioning from dairy milk to non-dairy milk.

To the instructions that I’ve listed above, I will add the following:

– Add a pinch of salt and a teaspoon of honey to the rice while blending. You can even add vanilla, stevia, agave nectar, or make chocolate rice milk by throwing in some cocoa powder.

– Use the finest strainer you can find to separate the rice grits from the milk. Alternatively, you can purchase rice and nut milk bags at health food stores, which are made of fine-mesh fabric, designed specifically for this purpose. 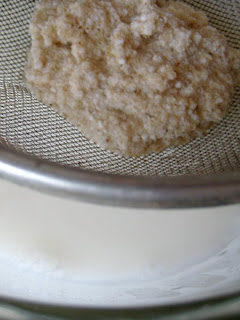 – Keep rice milk in a sterilized, sealed glass container for up to four days. Shake before use.

– Wondering what to do with those rice grits? Use them to make rice porridge for breakfast: simply cover the grits with water, bring to a boil, reduce heat and simmer with cinnamon and raisins until the water is absorbed. Then add rice milk. Waste not, want not!