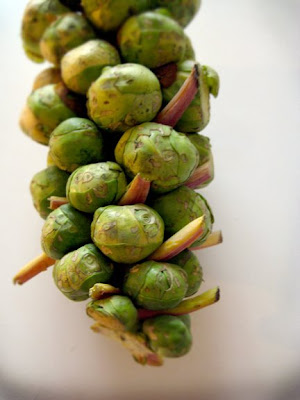 I wish my grandmother was hooked up to the internet, as she would shed a proud tear reading this post about my new found obsession with brussels sprouts. When I was four years old she forced me to eat them, and I clearly remember bawling hysterically while trying to chew the sour little shrunken heads without tasting them. I was officially traumatized and knew that we would never get along. The brussels sprouts I mean. I have since forgiven my grandmother.

The only reason I gave these little guys another shot, was because they appeared in my CSA (Community Supported Agriculture) box last week, and I am not one to waste organic produce. However, I knew that there was no way I would give the sprouts a second chance unless they were sexed up a bit. I mean, what’s with steaming them anyway? Boring! To bring the brussles into the 21st century, I went in search of a more modern method of prep. Lo and behold, on 101 cookbooks.com, I found the perfect recipe for a vegetarian like me: caramelized tofu with brussels sprouts. Halleluiah!

But before I get to the recipe, I should really talk about the amazing qualities of brussels sprouts that will only serve to entice you further.
Brussels sprouts are a part of the Brassica family of vegetables, also referred to as the Cruciferous family, which include 34 edibles such as cabbage, broccoli, cauliflower, collards, and kale…all your favorites, right?

Power House Veggies!
Most cruciferous vegetables, including brussels sprouts, are excellent sources of vitamin C (perfect for this time of year!), folic acid, vitamin A, potassium, fibre, and they even contain omega-3 essential fatty acids! 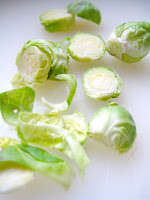 Brussels sprouts also contain the seemingly miraculous plant phytonutrients that enhance the activity of the body’s natural defense systems to protect against disease, including cancer. Scientists have found that sulforaphane, one of the powerful glucosinolate phytonutrients found in Brussels sprouts and other cruciferous vegetables, boosts the body’s detoxification enzymes, potentially by altering gene expression, thus helping to clear potentially carcinogenic substances more quickly.
Sulforaphane, which is formed when cruciferous vegetables such as Brussels sprouts are chopped or chewed, is already known to trigger the liver to produce enzymes that detoxify cancer-causing chemicals, inhibit chemically-induced breast cancers in animal studies, and induce colon cancer cells to commit suicide. A study published in the Journal of Nutrition also suggests that sulforaphane may help stop the proliferation of breast cancer cells, even in the later stages of their growth.

Brussels Sprouts and Goitrogens
Brussels sprouts contain goitrogens, naturally occurring substances in certain foods that can interfere with the functioning of the thyroid gland. Individuals with already existing and untreated thyroid problems may want to avoid Brussels sprouts for this reason. Cooking may help to inactivate the goitrogenic compounds found in food. However, it is not clear from the research exactly what percent of goitrogenic compounds get inactivated by cooking, or exactly how much risk is involved with the consumption of Brussels sprouts by individuals with pre-existing and untreated thyroid problems. 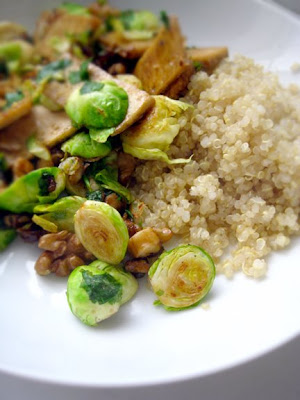 Caramelized Tofu with Brussels Sprouts
Ingredients:
7 – 8 ounces extra-firm tofu cut into thin 1-inch segments
a couple pinches of fine-grain sea salt
a couple splashes of coconut or olive oil
2 medium cloves garlic, minced
1/3 cup pecans or walnuts, chopped
2 – 3 tablespoons Sucanat, (or the least processed organic cane sugar you can get your hands on)
1/4 cup cilantro, chopped
1/2 lb. (or more!) brussels sprouts, washed and cut into halves or quarters (depending on their size)

Directions:
1. Cook the tofu strips in large hot skillet (or pot) with a bit of salt and a splash of oil. Sauté until slightly golden, about 4 minutes.
2. Add the garlic and nuts, and cook for another minute. Stir in sugar. Cook for another couple of minutes until the sugar has melted. Scrape the tofu out onto a plate and set aside while you cook the brussels sprouts.
3. In the same pan (no need to wash), add a touch more oil, another pinch of salt, and dial the heat up to medium-high. When the pan is nice and hot stir in the shredded brussels sprouts. Cook for 2 – 3 minutes, stirring a couple times (but not too often) until you get some golden bits, and the rest of the sprouts are bright and delicious. Add the chopped cilantro, give a quick stir and serve immediately.

Tip: I liked this dish (all 5 times I’ve eaten it in the past week and half) served with quinoa or short grain brown rice. Eaten with a whole grain, this meal becomes very balanced and filling….and seriously addictive.

I never thought I would say it, but I’ve found a new love. It could be the health benefits, it could be how cute they look all in a row sitting on their stalk, but I think it is actually the taste that keeps me coming back for more. Bright, earthy and green, they sing in my mouth and keep my body dancing.

3 thoughts on “Obsessed with Cruciferous”