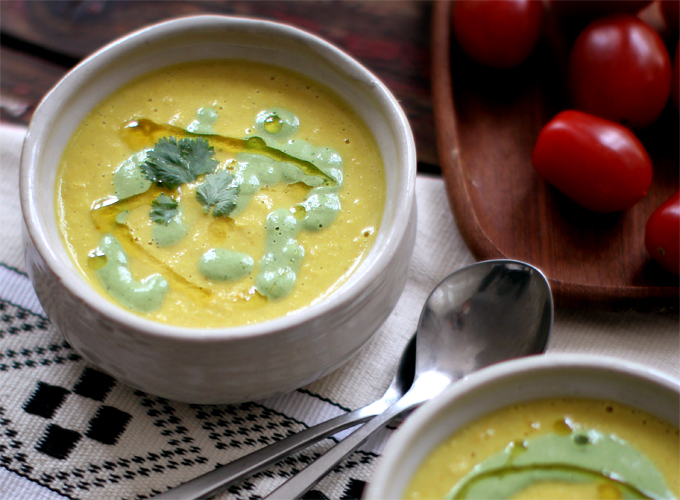 Life is pretty whack-tastic at the moment. That word means crazy.
I don’t think I ever mentioned it, but my love and I bought our first home a few months ago, which was and is, very exciting. While I was away in Canada, he moved all of our stuff to the new apartment (great timing on my part, eh?), meaning that I came back to Denmark to a completely new space. The other thing I know I didn’t mention was that before I left for the summer we started renovating, hoping to be mostly finished before September. Ha. Right.

What are we renovating you ask? Well, of course the kitchen. In fact, we removed an entire bedroom to make way for what will be a brand-spankin’ new food-makin’-space-of-my-dreams. In the meantime, I am living in a construction zone with a bed in it. Nothing has been unpacked because the dust is so thick I am afraid of having to wash everything we own if I do, so boxes remain piled high in every corner. We have very little lighting because there has been no electricity in half of the house, no internet, and only running water in the bathroom sink. I can brush my teeth, at least. Everyone can appreciate that.
So needless to say, it’s been an interesting challenging couple weeks. I am trying to be as patient as possible, but I have never wanted just a simple cup of hot tea so very badly. And I miss making food. A lot.

What does someone who cooks and writes recipes for a living do in this situation like this? Call up a really nice friend, of course. Conveniently, my buddy Natasha was out of town this weekend and in exchange for feeding her fish, I got to play in her kitchen. Whew! Crisis averted. It’s amazing how grounding and relieving it is to get my fingers around a knife and my nose in a pot again. 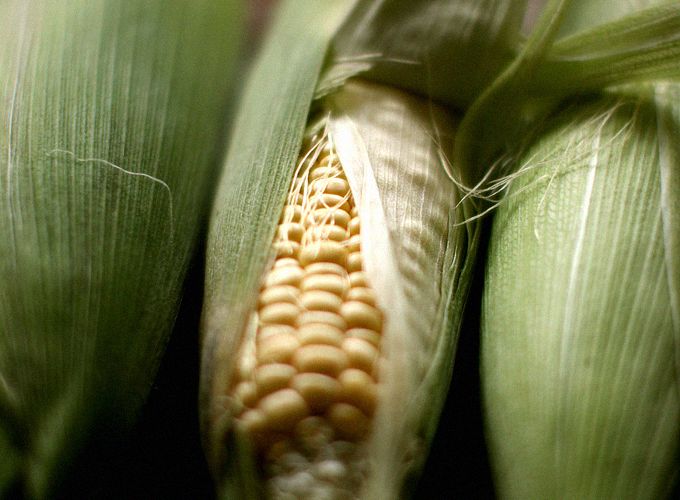 To further ground myself and deliver some much-needed comfort to my body and soul, I decided to make the first soup of the season – it is September after all! Although all of you lucky people on the other side of the pond are still bathing in 30° sunshine, Denmark is just as I’d expected; a month ahead of the game and already flirting with autumn.

This Cashew Corn Chowder was just what I needed to feel like a normal person again. Its rich and satisfying creaminess soothes even the most wracked nerves. Case in point, Natasha returned from her travels worn out and teetering on flu-y, yet upon eating said chowder, told me that the soup saved her life. Magic chowder? Oh yes, quite possibly. 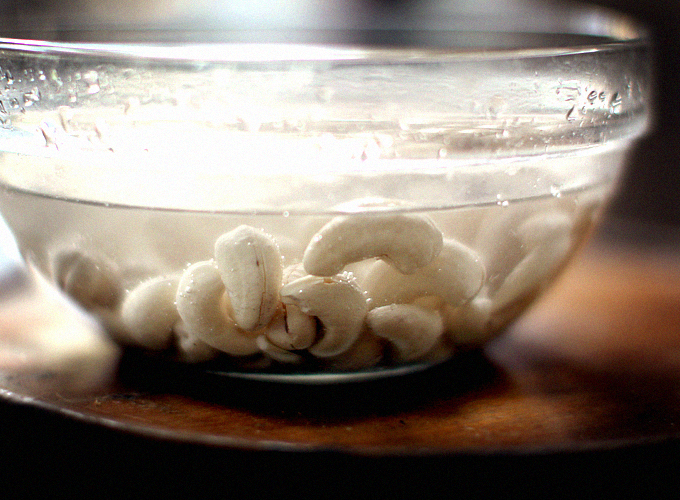 Classic chowder relies heavily on milk and cream, and perhaps a little butter for extra unctuousness. As yum as that is, if you have never used cashews to replace regular cream or milk in a soup before, I highly recommend it. Even if you are cooking for someone who is on the dairy train, it’s a lovely change of pace and gives a different flavour profile. I included a second little recipe for a cream sauce that uses cilantro, but you could simply use this recipe as inspiration to create any kind of cream sauce! All you have to do is start with soaked cashews (at least 4 hours), throw them in a blender with water, some kind of acid like lemon juice or apple cider vinegar, a little salt, perhaps a sweetener and herbs and spices to suit your dish. I once made a gorgeous saffron cream sauce when I catered a wedding and it was a major hit, even with the traditional meat-and-potato-loving guests. It is unapologetically rich and tastes totally indulgent, meanwhile you’re eating a handful of sprouted nuts and your tongue is none the wiser.

The other superstar ingredient in this soup is turmeric. Turmeric is the boss. Its powerful golden pigment, called curcumin is what gives most curry powders and ballpark mustard its distinctive yellow colour. Aside from making everything it touches turn to gold (I mean this quite literally – wooden spoons and white countertops beware), this curcumin has been shown to be incredibly anti-inflammatory, comparable to the effects of hydrocortisone and phenylbutazone. Unlike these potent drugs however, curcumin produces no toxicity, and is safe to eat every day. I add turmeric to many foods, including curries of course, but also to warm drinks in the winter, smoothies, dressings and dips. Its flavour is nothing to write home about, making it conveniently neutral enough to sprinkle on many dishes. Slightly bitter with hints of mustard, turmeric pairs best with savory dishes, although as I mentioned above, a little pinch in a berry smoothie is surprisingly tasty. 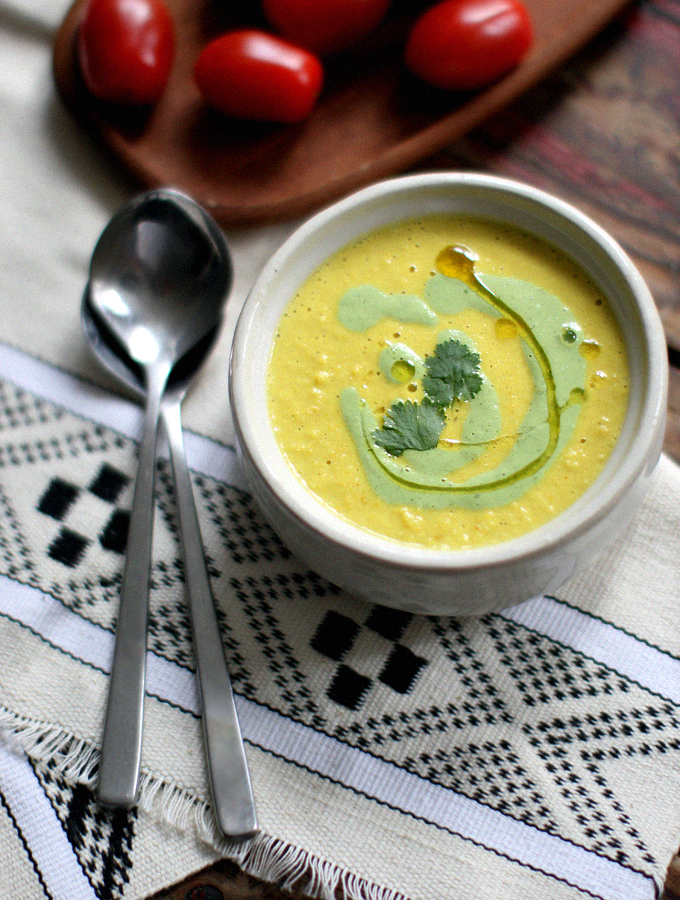 Directions:
1. Heat oil in a large pot over medium heat. When hot, add turmeric, cumin and cayenne and cook for about a minute, until fragrant. Add onions and salt, and cook for 5 minutes until softened. Add garlic. If the bottom of the pot becomes dry, add a little broth instead of oil to moisten things up.
2. While the onions and garlic are cooking, husk the cobs of corn. Cut off the kernels by standing the corn on one end and slicing downwards. Add corn kernels to the pot and stir to coat with spices. Cook for 5 minutes then add the remaining broth. Bring to a boil, then lower to a simmer and cook until the corn is bright yellow and sweet, about 5 minutes. During this time, make the cilantro cream (see recipe below)
3. Once the corn is cooked, remove pot from heat and transfer the soup to a blender, reserving a few tablespoons of the whole corn kernels for garnish. Add soaked and rinsed cashews. Blend on high until completely smooth. Add water to thin, if desired. Season to taste. Return soup to the pot to keep warm if necessary. Serve with cilantro cream, a drizzle of olive oil, a few kernels of corn and plenty of cracked black pepper.

Directions:
1. Put all ingredients in a blender and blend on high until completely smooth. Season to taste. Store leftovers in a sealed glass container.

Shot nerves and waning patience aside, I have visions of eating another bowl of soup, fueling me with enough mental strength to create a Facebook album entitled: “A cook builds a kitchen”, or something to that effect. Aren’t you excited? It sure is thrilling stuff I tell ya, however dusty and inconvenient the situation seems now. That first hot cup of tea is going to be the finest I’ve ever made.
Stay tuned friends.

Much love and sawdust,
Sarah B.