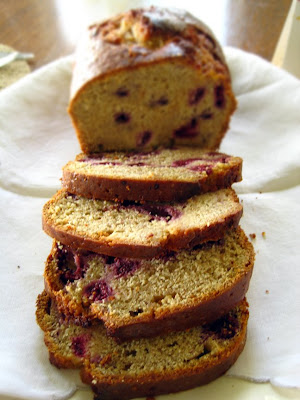 Baking, unfortunately, is not like cooking. It’s a fine science, and recipe alteration takes some experience. I decided that for mother’s day, I would show my step mom how to alter a good recipe in a healthy way without running into too many problems. The cake turned out really well – and even my dad, the king of sugar and preservatives, liked it.

It’s relatively easy to make your favorite recipes into healthy ones simply by adding, subtracting, or modifying a few ingredients. You can take a modest pound cake full of empty calories and turn it into a fiber-rich, low-fat, flavorful party-in-your-mouth without anyone even noticing! Just follow these simple steps and you’re on your way to healthier heaven.

Fat: For baked goods, use half the butter, shortening or oil and replace the other half with unsweetened applesauce, mashed banana or prune puree.

Sugar: Reduce the amount of sugar by one-third to one-half. When you use less sugar, add spices such as cinnamon, cloves, allspice and nutmeg or flavorings such as vanilla extract or almond flavoring to enhance the sweetness of the food.

Fiber: Substitute white flour for a whole grain flour such as spelt, kamut, barley, oat, or whole wheat. Or, just use half the white flour and half whole grain; you’ll still be doing yourself a big favor! When possible, add extra fruits and vegetables to your recipe and include the peel when appropriate.

Eggs: This helps for vegan baking! Replace 1 egg in baking with 1 tbsp ground flax mixed with 3 tbsp water. It will bind ingredients just as well and provide a boost of fiber.

Glaze:
2 Tbsp. pure maple syrup
2 Tbsp. lemon juice
(I added this glaze because I reduced the sugar by half in the modified recipe and thought that the cake would taste better with a real sweetness on the top. It worked!)

Directions
Preheat oven to 350 F. Coat 6 cup loaf pan with butter or light flavored oil. Sift together four, baking powder, baking soda and salt; set aside. In a large bowl beat butter until creamy; gradually beat in sugar, about 2-3 minutes until mixture is light in colour. Gradually beat in egg, egg whites, extract and lemon peel. Beat in flour mixture and yogurt, alternating each, beginning and ending with flour mixture; fold in frozen raspberries. Pour batter into prepared pan and bake until a wooden toothpick inserted near the middle comes out clean (time will vary depending on your oven. My cake baked for 1 hour and 20 minutes, but check yours after 45 minutes). Cool in pan for 10 minutes. Slide a thin knife around the edges of cake to loosen, invert pan onto cooling rack. Make glaze by whisking maple syrup and lemon juice together. While still slightly warm, perforate top of cake with a fork and carefully spoon on the glaze. Cool completely. Slice and serve.

11 thoughts on “Pound for Pound”